IDH and partners launch the first PPI Compact in Colombia

Intrigued by this story?

There are various way to make a positive impact on our world. Contribute to change and make an impact yourself

The state of Huila, Colombia, has consolidated a historic landmark toward long-term landscape development with the launch of the Produce, Preserve and Include Compact (PPI) - the first of three initiatives planned by IDH for that country. The event took place on September 2, during the International Coffee, Cocoa and Agrotourism Fair, in the city of Neiva.

Daan Wensing, CEO of IDH, celebrated the moment and congratulated the public and private partners for the commitments made under the Compact, and pointed out that it will work as a motivation for other states. "We know there is still hard work to be done in order to deliver the results. And we are on this journey together. IDH is a partner in this, and we look forward to supporting Production, Protection and Inclusion in the state of Huila," he said.

In May 2020, IDH and the government of Huila signed an agreement In May 2020, IDH and the Huila government signed an agreement to make official their interest in developing the Compact. After several months of meetings and workshops, the goals, and indicators of the three pillars that will guide the implementation of the Compact in the coming years were consolidated.

"We have great expectations regarding the PPI because it is the way we also conceive rural and agricultural development: with competitiveness and environmental sustainability as well as socially inclusive," added the Governor of Huila, Luiz Enrique Dussan López.

The planned actions are aimed at integrating public policies, boosting sustainable production, considering the main sectors of the economy in the region, conserving, and restoring native vegetation, as well as promoting the socioeconomic inclusion of family farming and traditional populations.

The director of the State Secretariat for Economic Affairs (SECO) of the Swiss Embassy in Colombia, Julien Robert, said he is very pleased, for the Compact is in line with what is advocated by international cooperation. "I want to restate our interest and commitment to continue supporting and being partners with IDH and the government of Huila to develop the productive chains."

The Minister of Agriculture, Rodolfo Zea, also attended the event and endorsed his support for the initiative. "This initiative is very significant because it invests in the agricultural and livestock sectors thus bringing a lot of benefits to everyone," he said.

In Huila, IDH also invests in the project "El Efecto Cacau", in partnership with the company Luker Chocolate, to strengthen and boost the production chain in several municipalities. Learn more on here. 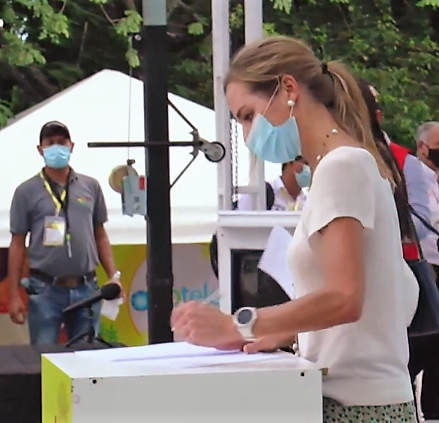 This impact story is related to